Many importers have 18 months from the publish date to comply with FSVP requirements. Others have six months from the date that their foreign suppliers must be in compliance.

The FDA defines an FSVP as “a program that importers covered by the rule must have in place to verify that their foreign suppliers are producing food in a manner that provides the same level of public health protection as the preventive controls or produce safety regulations, as appropriate, and to ensure that the supplier’s food is not adulterated and is not misbranded with respect to allergen labeling.”

With 764 total food recalls in 2016, it’s clear that controlling for your foreign suppliers should be a top priority. Food recall software that helps you address FSVP will be essential.

Many groups have a vested interest in FSVP compliance, including importers, foreign food suppliers, agents of foreign owners, brokers and foreign government representatives. Many are eager to comply with the provisions of the FSVP final rule because it offers reduced recall potential and attendant adverse publicity. FSVP compliance can even represent a competitive advantage as it enhances one’s brand and reputation.

Transparency across your organization unlocks big benefits, especially with consumers. We’ve written about the expectations of consumers around food transparency in the past, and 2017 is the year of food supply chain transparency.

The overall importance of the FSMA’s Foreign Supplier Verification Program is underscored by statistics regarding the number of foreign food facilities registered with the FDA. As of January 1, 2016, 120,822 of the 207,655 FDA-registered food facilities were outside the United States, according to a report in Food Safety News. The top five foreign countries in terms of the volume of FDA registrations are, in order, Japan, France, Italy, China and Mexico.

The FDA requires the registration of all food facilities that process, pack, manufacture or store food, beverages and dietary supplements for domestic consumption. Although facilities in the United States account for about four-fifths of all food consumed, 58 percent of the FDA-registered food facilities are outside the country.

Data regarding foreign FDA registrations tends to be more reliable, because such suppliers must notify the FDA every time they ship food to the U.S. The form they file must include the registration number - an absolute incentive to keep registrations current. Under FSMA, food facility registrations were required beginning October 1, 2012. Renewals are due in even-numbered years.

Importers are now required to:

Importers can customize FSVPs using a variety of options, although annual on-site audits of supplier facilities is most common. Such audits are required when there is a reasonable likelihood of adverse health impacts without them. Other means of verification are possible as long as they provide adequate guarantees that the food being produced meets U.S. safety standards.

Risk evaluations must re-occur every three years, or any time new data emerges regarding a possible hazard or issues regarding the performance of a foreign supplier.

If you work with foreign suppliers it’s imperative that you understand the foreign supplier verification rules taking effect with FSMA, and we partnered with Matt Regusci of WQS Food Verification and TrainToComply to teach you exactly what to watch for and why it matters for your company. 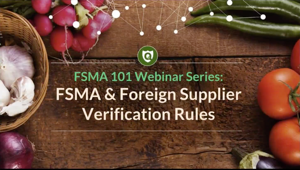